Equity Markets and US Presidents

Politics and portfolios may be intertwined in the short-term. We occasionally see markets jump, or fall, following large political events, for example, the FTSE 100 fell sharply following the Brexit vote in 2016 and recovered in the following week! The recent US election will undoubtedly cause some investors to question whether portfolios need to change, but second-guessing market prices is an incredibly difficult game which very few people have any success at. To the long-term investor, the current President, be them Republican or Democrat, is largely irrelevant.

The final days of Donald Trump’s Presidency are turning out to be a somewhat unedifying affair. Enough said. Yet when it comes down to the returns of stock markets under different Presidents – Democrat or Republican – does it really matter who is in power? Should we change our portfolios? Can we predict what is going to happen? The quick answers are ‘no’, ‘no’ and ‘no’! Take a look at the figure below which sets out the returns of the US stock market after inflation going back to Richard Nixon. There is no clear conclusion to be drawn. 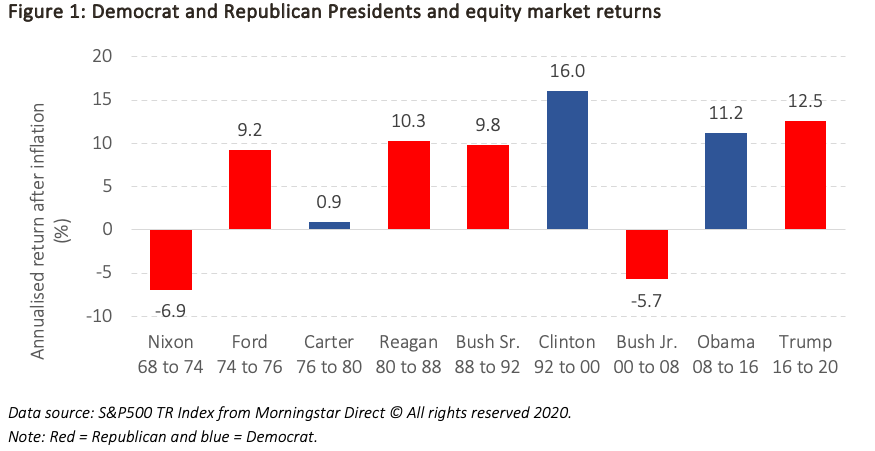 This is perhaps not really very surprising as the price of a company’s shares is based on the future cashflows that it will deliver discounted back to a present value, using a discount rate that reflects the risks associated with that company’s cashflows. A Presidential term is four years, but a company’s cashflows run into the distant future. Despite the partisan nature of US politics at this time, Democrats and Republicans are all still capitalists and believe in personal freedom, property rights and, yes – even if it does not feel like it at this moment – democracy. In a broad political sense, Democrats and Republicans are simply variations on a democratic, capitalist theme.

Active managers may try to position portfolios to reflect world events, but crystal ball gazing is hard to do. There was much talk of the ‘blue wave trade’ prior to the election to position for a Democrat clean sweep of all parts of government yet look how that seems to be turning out! A few days ago, the prospect of a vaccine for Covid-19 sent airlines, banks and energy companies soaring and Zoom and other ‘lockdown’ benefiters, such as Ocado, down. Random events and the release of new information moves the market’s view of cashflows and discount rates resulting in the movement of stock prices. Guessing against randomness is hard but taking on the known risk that equity returns are far less certain than holding cash, rewards investors who ignore this short-term noise and focus on the long-term. The choice of the US President is important to some, but to the long-term investor, it is largely irrelevant from an equity market perspective.