If you were asked who you thought was the world’s best investor, you might well say Warren Buffett, the Chairman and CEO of Berkshire Hathaway. That would not be an unreasonable answer, given he is worth US$ 71.5 billion today, give or take a few million for daily market movements! He is also often held up by those in support of ‘market beating’ strategies as a shining example of their creed. Over 40,000 avid followers attended the 2018 annual shareholders’ meeting, referred to by some as ‘Woodstock for capitalists’ and his style of investing is known as ‘Buffettology’, on which numerous books and articles have been penned.

To us Buffett is the exception that proves the rule. Although he (via Berkshire Hathaway) owns a concentrated pool of hand-picked companies, he has several traits in common with a more systematic approach, such as an infallible belief in the power of capitalism to create wealth over time, which requires discipline, patience and fortitude to capture. He is comfortable being different to the market; famously he avoided tech stocks in the late 1990s because he did not ‘get’ them. He also detests fund management costs that detract from market returns.

We have a huge amount of respect for Warren Buffett but provide an alternative narrative that perhaps simply reinforces how difficult it is to beat the relentless upward march – with some inevitable setbacks – of markets for long-term investors. Buffett has been investing for almost three quarters of a century, starting early. By 32 years of age he was worth just shy of US$2 million. He is now almost 90. His longevity in the game is a major factor in his legendary status. It might surprise you to know that had he retired early at 60 in 1990, he would have been worth a paltry US$ 3.3 billion! In other words he would have been worth under 5% of his net worth today. 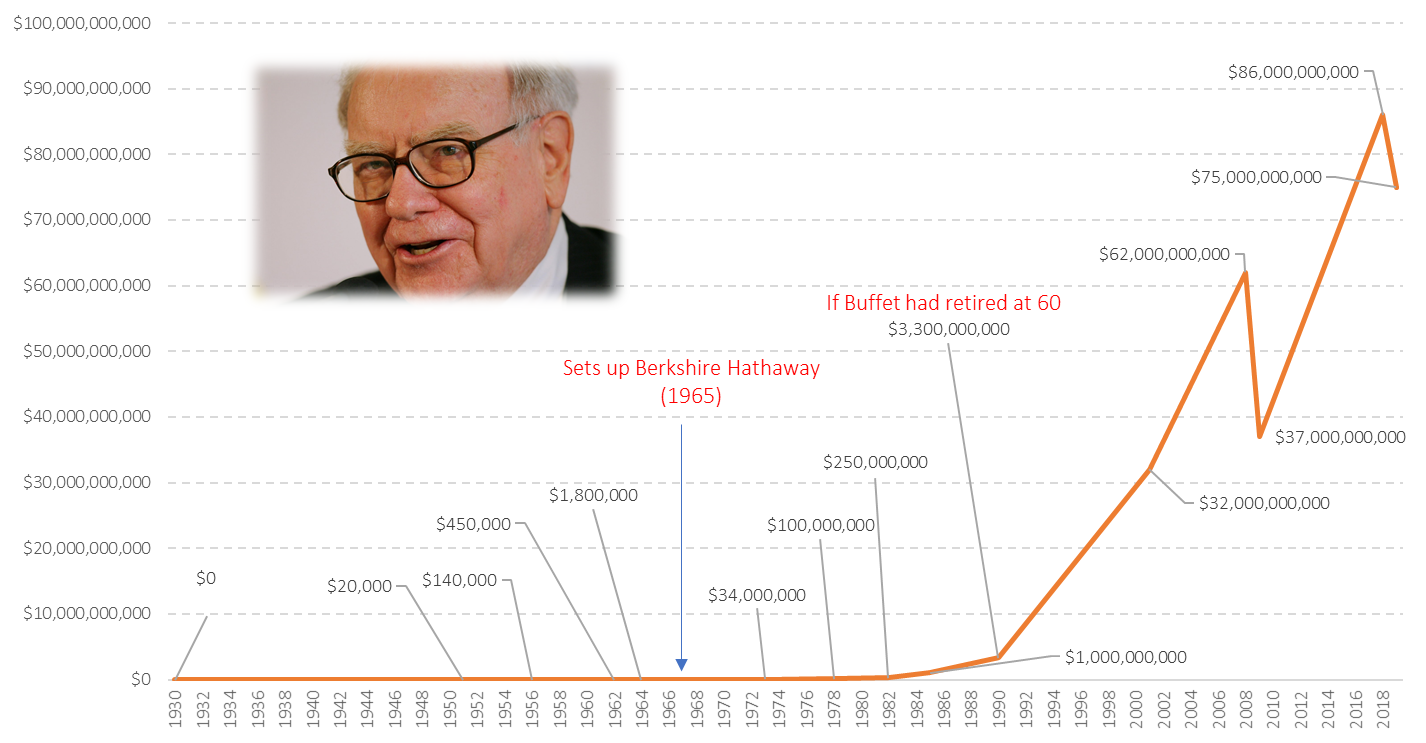 It is worth noting that it has been increasingly hard for Buffett to beat the market. In the early days, there were fewer research analysts and fund managers in the market and a far higher level of amateurs playing the game. He was the shark in the pool. In the chart below, we show how tricky beating the market has become. Imagine that he had been persuaded to run a mutual fund, not a listed investment holding company. A manager with such a track record would be justified in charging a 1% fee per annum. In the past 24 years, he would not have beaten the market. Even without these fees Berkshire Hathaway’s shares have struggled to beat the markets in the past decade or so. The chart below illustrates the annualised return achieved from the date on the horizontal axis to the end of 2019.

Figure 2: Berkshire Hathaway annualised performance relative to the US market (from specific year to present) 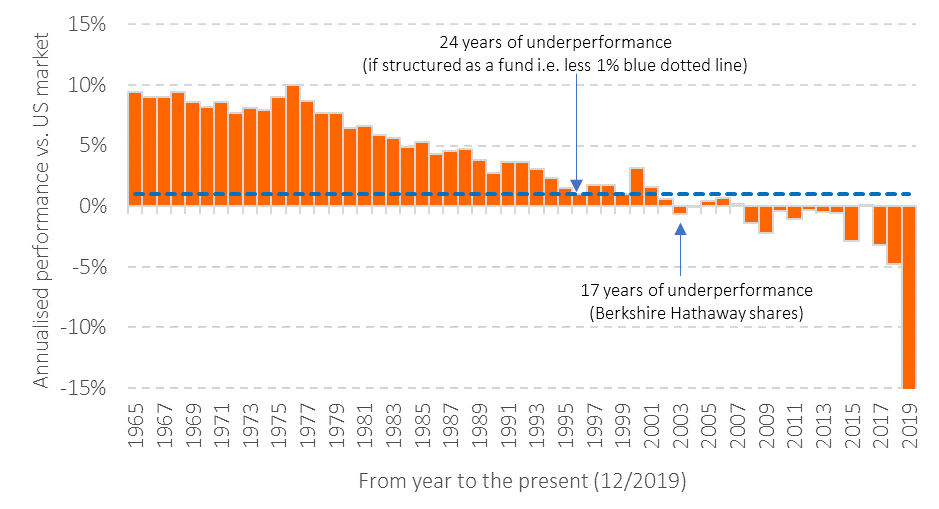 Although he will always be remembered for his investing prowess, folksy words of wisdom and his philanthropy (he intends to give away the bulk of his wealth), in our view his real legacy is his enduring advice to all investors that remains simple and direct:

‘When the dumb investor realises how dumb he is and invests in an index fund, he becomes smarter than the smartest investor…most investors, both institutional and individual, will find the best way to own common stocks is through an index fund that charges minimal fees.’