When one looks into the future it soon becomes apparent that a crystal ball would be useful. Unfortunately, they are in short supply. At times of uncertainty, such as this, it can be tempting to run ‘what if’ scenarios in our heads, such as ‘perhaps I should move into tech stocks and pharmaceutical companies – as surely these sectors will do well’ or to pick out specific companies that appear likely to thrive in the future. Two challenges exist. The first is that you won’t be the first person to have thought this and these views in aggregate are already reflected in market prices. The second is that in making such concentrated bets you have a high chance of being wrong and missing out on the companies that actually end up driving future returns. Remember, 30 years ago Amazon did not exist.

To get a feel for what these concentration risks look like, academics are fortunate to be able to dig around in a vast bank of stock market data in the US, known as the CRSP database. One such study* reveals some surprising and useful findings using data from 1926 to 2015. Whilst investment wisdom and empirical evidence support the notion that stocks – in aggregate – outperform cash over longer periods of time, a forensic look at individual stock returns tells a very different story. Here are some of the insights that the paper provides:

As the author states:

‘Non-diversified portfolios are subject to the risk that they will fail to include the relatively few stocks that, ex-post, generate large cumulative returns. Indeed the results help to understand why active strategies, which tend to be poorly diversified, most often lead to underperformance.’

At times like this – and in fact across all time periods – it makes enormous sense to remain highly diversified, as the risk of missing out on the next Exxon (the firm that has added most value to the US market ever), Apple or Amazon. Simply looking at the changing guard of the top ten US firms by revenues in 2000, 2010 and 2020 is revealing. 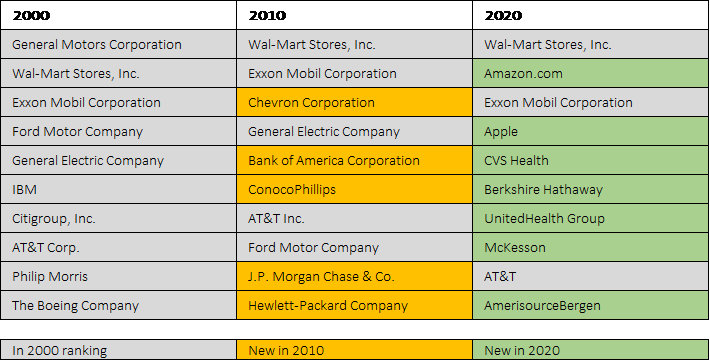 Correctly picking which few companies are going to be driving stock market returns over the next decade or two will not be easy, or likely. Making sure that you own them can be achieved by owning a broadly diversified portfolio with many hundreds, if not thousands of companies in them. Missing out on these companies – perhaps that don’t even yet exist – could make all the difference between a good outcome and a very poor one. Remember, the old order changeth!

Authorised and regulated by the Financial Conduct Authority
For your protection, unresolved complaints can be referred to the Financial Ombudsman Service

Authorised and regulated by the Financial Conduct Authority
For your protection, unresolved complaints can be referred to the Financial Ombudsman Service